Parents contemplating child custody or access battles often grasp for reasons to justify subjecting their children to an ordeal that may be more about the parents’ warfare than the children’s welfare. Many of those parents use popular myths about child-related litigation to rationalize placing their kids on the custody battlefield. 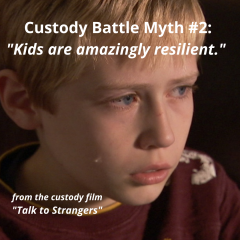 Where children are at risk for abuse or neglect, family court orders may well be necessary to protect them. Parents resorting to the courts for those purposes don’t need myths—or any excuse at all—to justify keeping their children safe. It’s the parents who litigate children’s issues because they’re unwilling to do the heavy lifting required to resolve them, who find solace in custody myths.

One of the most popular of those myths is that children’s innate resilience enables them to bounce back from all that divorce throws at them. Like many myths, it parlays a limited observation—that children can be resilient—into a kind of universal truth.

Some children are in fact characteristically quite resilient. Others are able to muster emotional hardiness in certain situations. But all children are not resilient in all circumstances.

It’s not unusual for children to bounce back from adversity. Indeed, good parents encourage and teach children to do just that. What good parents don’t do is create unnecessary challenges that children are entirely unprepared to handle.

Research performed five years ago at Duke University suggests that some children have a “resilience gene” that makes them better able to deal with parents despite an excess of strife. Other research has demonstrated that most children can be taught resilience skills.

But what about children who don’t have the ideal genetics or the necessary skills to deal with battling parents? For those children, the high level of parental conflict typically experienced during custody battles can cause serious and enduring emotional harm. That’s why parents—and their counsel—should try everything reasonably possible to avoid subjecting children to the trauma of custody/access battles.

My short film, Talk to Strangers is the story of two such children, 12-year-old Emily Sherwood and her 9-year-old brother Nicky. As their parents’ custody litigation winds its way slowly through the system, we see little sign of resilience in either child. What we see instead is a steady deterioration of the kids’ quality of life.

At the beginning of the story the children’s mother, Laura Sherwood declares that the siblings’ close relationship will be a “big help” to them during the custody case. Initially, this appears to be a reasonable prediction. Flashbacks reveal the siblings horsing around in Nicky’s room, and Emily cheering her brother’s heroics on the football field. Indeed in the first conversation we see between the siblings, Emily offers Nicky reassurance regarding his upcoming meeting with counsel to the children.

“You know how to handle grown-ups,” Emily bestows her pre-adolescent wisdom upon Nicky. “Just agree with them until they go away!”

But the anxieties and compromising situations spawned by the custody case take their toll on Emily and Nicky’s relationship. Emily becomes increasingly irritable and unavailable to Nicky, refusing to answer his questions about the divorce, and ultimately locking him out of her room.

Nicky loses track of his schoolbooks, demonstrates regressive behavior by slipping into his mother’s bed following nightmares, and quits football after forgetting plays because his mind got “all filled up” with a list of questions about his future that he carries in his pocket.

The literature is replete with those types of behavioral changes among children experiencing prolonged, high-level parental conflict. Such changes can signal risk of significant emotional disorder that parents embroiled in high-conflict divorce are often too preoccupied to notice.